If you’re looking for the most biodiverse habitats, forget the rainforests. Many biologists consider coral reefs to be more diverse and productive than their land equivalents. Corals are the only animals other than humans that are capable of building structures that can be seen by space. The Great Barrier Reef for instance is constructed from small coral polyps that together form a nearly 2000 mile long barrier reef.

Coral reefs are found around the globe in warm waters. Corals can not stand temperatures that drop much below an average temperature of 18°C. This limits their habitat to waters between 23°N and 23°S latitude.

In Florida the last real reefs end around Miami. The same is true in Australia where the last reefs are just north of Fraser Island. 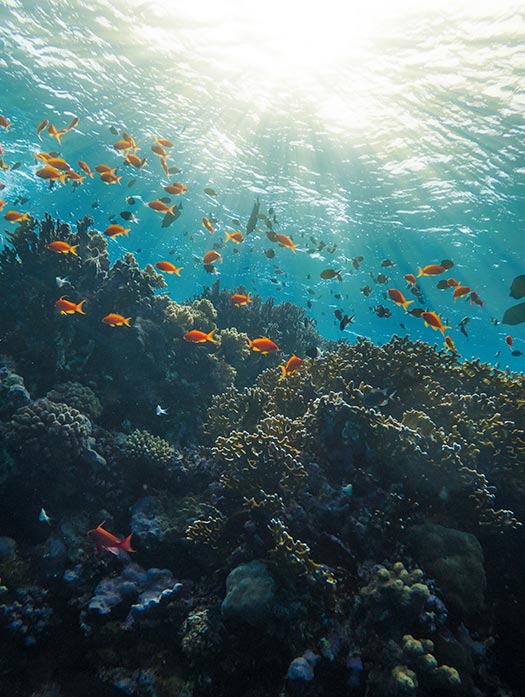 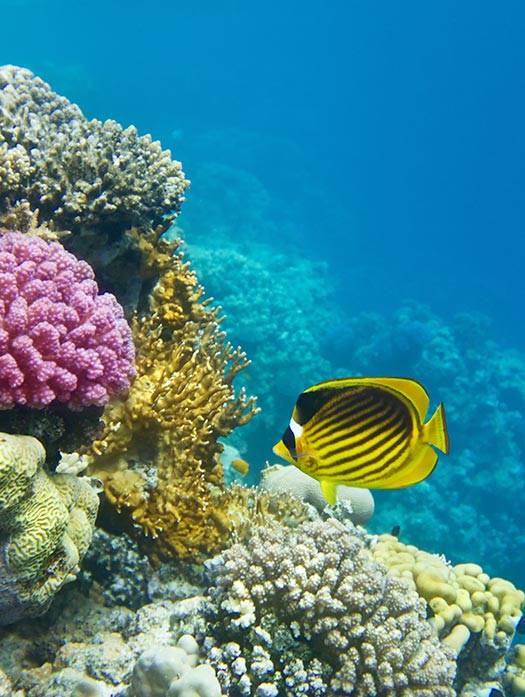 Taxonomy of Corals
Corals are members of the phylum Cnidaria, which they share with jellyfish, comb jellies and sea anemones. Class Anthozoa denotes soft and hard corals (6,000 species total). Reef building corals (hermatypic corals) belong to the order Scleractinia. To date there are no freshwater corals.

Biogeography
Coral reefs are more diverse on the east coasts of continents. Thus, corals are found primarily in the Caribbean, Florida and Brazil in the Americas while there is very little coral development in California, Chile or any American Pacific coast. This may not seem logical until you think about the way ocean currents work.

Biodiversity centers
One interesting biogeographical phenomena is the presence of a central biologically diverse region of the world for coral reefs. The indo-pacific ocean, particularly around the waters of Indonesia has the most diverse coral reef ecosystems in the world. Diversity drops as you leave this epicenter. Coral reefs in the western Pacific have 75% more genera and 85% more species of corals than coral reefs in the Caribbean.

Physiology – Plants or animals?
The essence of what makes the coral reef work is the presence of of a unique symbiosis with unicellular algae called zooxanthellae. These zooxanthellae help the coral by giving the coral the by-products of their photosynthetic activity. Corals help the zooxanthellae by providing them with an environment to live. Zooxanthellae provide the corals with their diverse colors. Without them the corals are white. During bleaching events (conditions that stress corals such as high temperatures), corals release their zooxanthellae and become completely white.

While zooxanthellae allow corals to use the energy from the sun, corals themselves are not autotrophic. Corals are made up of individual coral polyps whom are carnivorous. Each has a small mouth and stinging tentacles. However, coral reefs are often found in clear blue water. This water is nutrient poor and thus corals are able to thrive because a large portion of their energy is actually acquired from their symbiosis with these small algae.

Reproduction
Corals can reproduce both sexually and asexually. Asexual reproduction occurs when fragments of a coral break off and start a new colony. Certain corals like staghorn coral rely on this method heavily.

Sexual reproduction in corals is a unique event that is often synchronous. On a few nights every year corals will have a mass spawning event. The most amazing thing about mass spawning events is the ability of coral species to synchronize to a given hour. In Australia, on the great barrier reef spawnings occur in November. During this event spawn are released and cover the surface of the water. When diving in an event like this it feels like it is snowing upside down!