Coniferous forests can be found throughout the world, but don’t let their commonness fool you. They contain some of world’s most extreme trees. The world’s tallest tree, a coastal redwood named Hyperion, reaches up to 379 feet—as tall as a 35-story building. A giant sequoia named General Sherman isn’t quite as tall as Hyperion but it is the world’s largest tree, clocking in at around 2.5 million pounds—as much as eight blue whales combined! The world’s single oldest tree is a Great Basin bristlecone pine, dating back more than 5,000 years—almost as old as my grandma.

Conifers can grow quite happily alongside deciduous trees in many biomes, like the temperate deciduous biome or the taiga biome. But conifers really reign supreme and dominate the landscape in areas where it’s too difficult for finicky deciduous trees to live.

Coniferous forests grow in a wide range of climates, from the coldest polar regions to the warmest tropical regions and everything in between. The reason they’re so prevalent worldwide is because they take advantage of certain environmental conditions that other trees aren’t able to live in as well. As a result, they can look a lot different from other types of biomes. 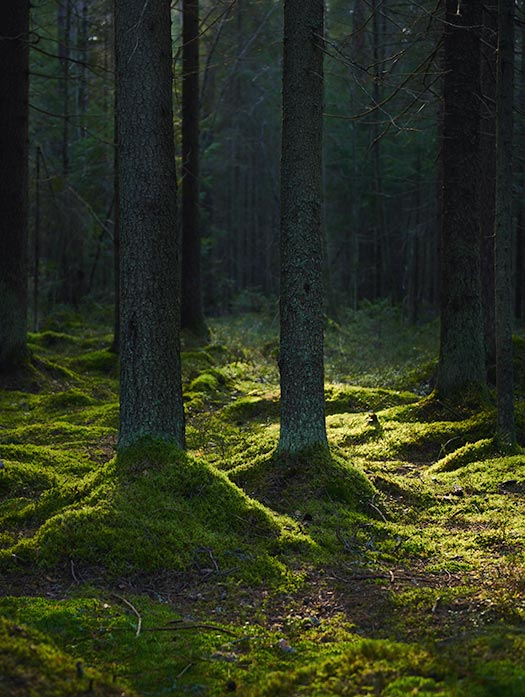 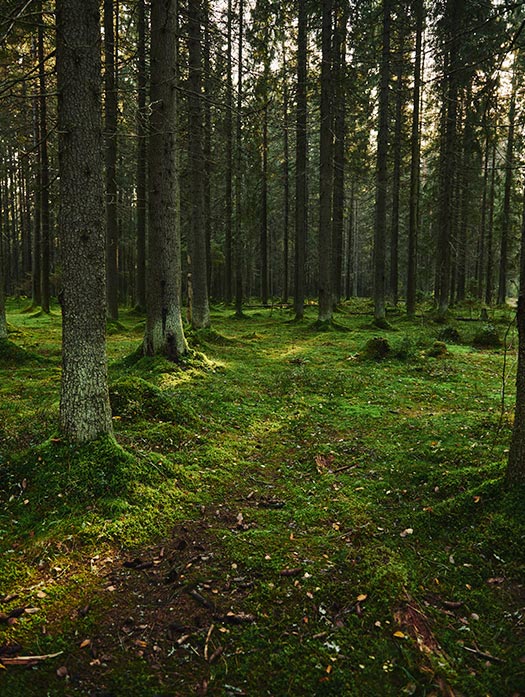 Coniferous trees succeed in this type of biome because they’re adapted to take advantage of conditions that other trees cannot. Conifers specialize at growing in poor soils that are often sandier and drier than the richer soils found in deciduous forests. Deciduous trees have a live-fast-die-young approach to their life cycle; each year, they put out a whole tree-full of new leaves, only to have them all die in the fall. Deciduous leaves are great at soaking up lots of sunlight and energy for the tree, but they’re also expensive to make. Trees get their nutrients from the soil, but not all soil has enough nutrients to support a deciduous tree in its yearly leaf-making endeavors. That’s where conifers surpass them.

When there aren’t enough nutrients in the soil, coniferous trees flourish because they take the opposite approach: they grow slow and die old. Rather than putting out new “leaves” each spring, they take care of their existing needles and keep them for many years. That way, they don’t need massive amounts of fresh soil nutrients each spring, so they aren’t limited by poor nutrient conditions in the soil. Each winter, the needles enter a state of suspended animation, much like Rip Van Winkle, only to wake up in the spring again and start cranking away.

What’s so special about conifers?

Conifers have developed a lot of really neat adaptations to survive and thrive in nutrient-limited conditions. One of the biggest adaptations are their needles.

Conifer needles may look pretty mundane, but the tree has put a lot of work into making them, and it expects to get a lot out of them. Each needle has a waxy coating called a cuticle (not to be confused with the cuticle on your fingernail!) that helps keep precious moisture from leaking out. Needles are also pumped full of a mixture of chemicals like tannins and terpenes to make them distasteful to herbivores. It’d be sad for a tree to spend so much time and energy making a needle only to have a moose come along and eat it!

Conifers usually grow slower than their deciduous counterparts because they’re often already growing in nutrient-limited soils, and they’re spending a lot of the nutrients they do have in creating super-needles. They use these needles for a long time, though—from two to five years or longer.

Conifers are often known as evergreens because they keep their needles throughout the winter and stay green year-round. But, there are actually a few species of deciduous conifers! They’re known as tamaracks, or larches, and they have soft needles that turn yellow and fall off each autumn. Tamaracks employ a strategy halfway between that of a conifer and a deciduous tree, and it’s very successful in some environments. They’re an oddity and fun to find in the woods!

If left to their own devices, without interference from humans or other disturbances, many mixed deciduous/conifer forests will eventually go through a process called forest succession, where the types of trees in the forest slowly change over time. Conifers themselves often end up dominating many landscapes over time because they will slowly make it harder for other types of trees to grow. Remember how conifers are best at growing in poor soil conditions? That’s exactly what they do to the soil over time: they make it too poor for other species to grow.

The way conifers affect soil is pretty interesting. Although they don’t shed their needles every fall, they still do drop needles occasionally. Over time, these needles pile up around the base of the tree. The needles don’t decay like deciduous leaves—they have far too many chemicals and waxes for that. Instead, they break down slowly and make the soil even more nutrient-limited. Tannins in the needles are also acidic and leach out into the soil, making it even harder for other deciduous plants and trees to get nutrients.

In some coniferous forests, there are so many acidic tannins in the soil that they leach into rivers and stain the water yellow. The Taquamenon Falls in the upper peninsula of Michigan are famous for their colored water.

What types of plants can be found in coniferous forests?

There are many types of conifers that can dominate coniferous forest biomes, such as pine, spruce, cypress, kauri, and redwood.

Other plants still grow in coniferous forests, but they’re not as prevalent as the conifers themselves. Many grasses and herbaceous plants can still survive or even flourish in the coniferous understory. Some plants and fungi are even adapted to live specifically with conifers, like slipper jack boletes and some mosses.

What types of animals can be found in coniferous forests?

Animals like pine marten, spotted owls, pine beetles, and crossbill birds have adapted to live almost entirely within coniferous forests. Crossbills, for example, have unique beaks where the upper and the lower parts of their beak completely overlap each other. While this looks odd, it serves in important purpose: it allows the crossbill to pry open cones to get to the delicious seeds inside:

Some animals rely only partially on coniferous forests and travel elsewhere for other sources of food and cover. Moose, porcupines, mice, deer, and fox, among many other animals, can often be found in coniferous forests, although oftentimes they still require trips to other types of habitats. Moose, for example, prefer to eat deciduous leaves but will frequently travel through coniferous forests.

One of the most surprising things about many coniferous forests is that they actually need regular forest fires in order to be healthy. We typically think of forest fires as catastrophic occurrences that wipe out all living things for miles. Forest fires certainly can do that, but they also have a less-well-known beneficial side.

A healthy coniferous forest fire looks a lot different from the raging fires we see blazed across the evening news. Healthy forest fires burn low to the ground and don’t even really make it up into the crown (top) of the forest at all. Instead, they burn with smaller flames across the forest floor, cleaning up any understory, so that all that’s left behind are the big coniferous trees that are the hallmark of this biome.

After a fire, the ground is changed. The burned plants release nutrients into the soil and make it even more fertile than it was before—almost like fertilizer for the next group of plants! The understory is also cleared of any domineering plants, allowing other types of plants a chance to grow. Because the fire frequently gives new plants a chance to get a foothold (get it?), fire-adapted coniferous forests can be some of the most diverse ecosystems in the world.

A prime example of how fire creates more diverse ecosystems is southern long-leaf pine forests. These forests once ranged across most of the southeastern U.S., yet due to conversion to agricultural land, over-logging, and fire suppression, these forests only occupy a tiny fraction of the lands they used to dominate.

Scientists have only recently realized how important fire is to these types of ecosystems, and now they’re changing gears: they’re actually using fire as a management tool to preserve some of the coniferous forests that we do have left. Rob caught up with a group of southern fire scientists to check out how this process works:

Other types of coniferous forests need fire for other reasons. Jack pine forests in the northern part of the Midwest and Canada, for example, actually can’t reproduce at all unless a forest fire comes through. They produce serotinous cones, which means that they’re always glued tightly shut by resins and waxes, and the seeds physically cannot get out of the cone—unless a forest fire comes through and melts the wax, releasing the seed.

Jack pine forests are unique on their own, but they also have another rare inhabitant: Kirtland warblers. These tiny gray and yellow birds have some of the most specific habitat requirements you can think of: they only nest in large, pure stands of jack pine forests, and the trees themselves must be between 5-20 feet tall and 6-22 years old.

As with many other fire-adapted coniferous forests, jack pines ecosystems have been on the decline, and the population of this tiny bird fell along with them. By 1974, there were just 167 known birds in existence, and they all bred in a single county in northern Michigan. Thanks to intensive management programs for jack pine forests, the population is finally increasing: in 2011, biologists counted 1,828 birds.

How economically important are coniferous forests?

Aside from being one of the most widespread biomes and chock full of biodiversity, coniferous forests also are some of the most economically valuable types of ecosystems. Most of the lumber that we use to build structures comes from conifers themselves, as well as a whole host of other products like paper, pencils, turpentine, and even cancer drugs like Taxol.

Want to see this in